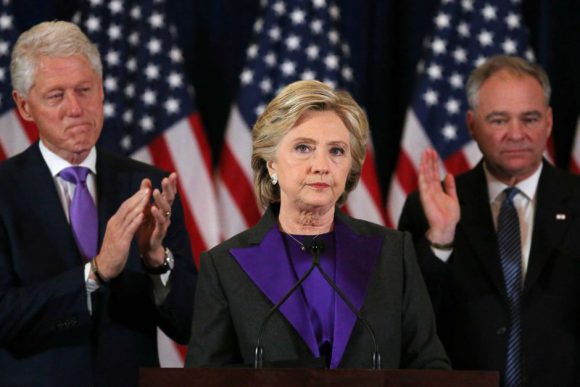 And I say only “some”, because one can only fit so much information on a single blog.

The results from last Tuesday’s U.S Presidential election sent shock waves throughout the world, and indeed, the best of us are still feeling the reverberations a week on.

Just this morning, Trump, the president-elect — yes, I still can’t believe it either– said he plans to deport either 2 or 3 million illegal migrants as an initial move.

Let’s take a moment to digest that.

Lest we forget, Trump said only last June that Mexico ‘doesn’t send their best people’.

During the 597-day presidential race*, much of the fashion industry sided with Hillary Clinton. This is no surprise, as the democratic values of her party are synonymous with fashion’s liberal ideas of self-expression, cultural values, creative freedom and inclusiveness. Not to mention she was the feminist icon our generation needed.

Amongst the sheer heartache and utter disbelief, Instagram was a popular choice of medium to express what was probably one of the worst news to wake up to in history.

Several merely posted a blank black image. Because, in times like these when a racist, sexist, xenophobic man is chosen for the top job, what else is there to say?

Today we are a divided country. Democracy has spoken. @wwd asked me less than 48 hours ago :what needed to be a first priority, I said "Unity" I hope and urge our new elected president and government to respect and protect our civil liberties and freedom. #nevergivingup #unitedwestand #newday

Our community has never felt more important than it does today. Click the link in bio to read @leandramedine's thoughts on what this election means for all of us.

"Move on and love more." — @carineroitfeld

#Mood after watching Hillary's concession speech. How do I go on with my business today? Will cancel appointments, have lunch, get eye brow threading, Botox top up and shop Matches or Net A Porter to make the pain go away.

Keep up GRACEFULNESS and hold on tight to everyone you love. Kisses iv (thank you @elenabrower thank you @hillaryclinton for trying to topple the patriarchy )

Took the L on this one…. Now, one foot in front of the other.

Donald Trump, The New President of the United States.

A photo posted by Patrick Demarchelier (@patrickdemarchelier) on Nov 9, 2016 at 10:07am PST

*Perhaps the U.S should consider significantly shortening the length of presidential campaigns. How could anyone NOT be exhausted to the limit watching and reading all the news stories, with the amount of issues that parallels a reality TV show?