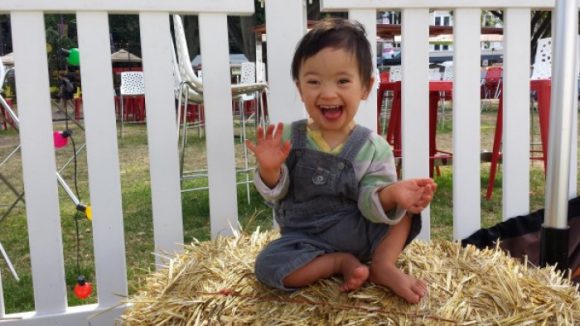 A long-time stall holder and community member has received anonymous backlash against her son’s attendance at her Saturday market stall.

Her 3-year-old son Noah has accompanied her since he got out of hospital two and a half years ago, after having complications at birth. He has sat happily behind her kitchen stall in a cot playing with his iPad and being cuddled by customers and fellow stall owners.

On Friday Jackie announced on her blog that she will quit her stall after complaints from anonymous stall holders regarding her son’s down syndrome. She says that while organisers at Orange Grove Markets have always been supportive of Noah’s condition, for which she will “forever be grateful”, they have told her that a member of the public has “rallied support” to have her son removed from the markets.

Rather than approaching Jackie directly, the people concerned have approached other stall holders and market organisers. She says she doesn’t think the complaints are about Noah having down syndrome, rather that people are worried about his safety in the market. Jackie says people are too concerned.

“They think I should be spending quality time with him at home, or paying a nanny $25 per hour to look after him offsite,” Jackie wrote on her blog.

Jackie says her son’s favourite day of the week is Saturdays because he gets to interact with people.

“Often when I pull up at the market he starts giggling with delight as he realises where we are,” she wrote.

“My staff and I take turns to break up his day with visits to the miniature ponies and the jumping castle and to say hello to the other stallholders.”

Jackie thinks that the incident is a result of a “clash of cultures”, that part of the Australian culture is having a separation of work and family life.

Photos of baby Noah taken from Jackie’s blog and Instagram