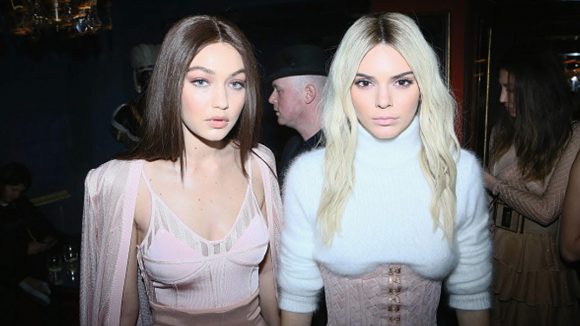 The Forbes World’s Highest-Paid Models List has been revealed and it’s no surprise who makes the cut.

Kendall Jenner and Gigi Hadid, who are part of the new guard of supermodels with a high-profile social media base, make the list at number 3 and 4, respectively.

Kendall Jenner’s huge social media following – $64 million – has helped her secure deals with Estee Lauder and Calvin Klein, who see her online influence as a bonus. Jenner was the best performer of all the models, with her earnings sky-rocketing to 150% from 2015.

Meanwhile genetically blessed Gigi Hadid made the list for the first time and earned a cool $9 million, and that’s thanks to her contracts with big-names Tommy Hilfiger and Maybelline.

"Leading with green pear, jasmine and featuring key notes of cedarwood, it's undeniably our most playfully feminine fragrance yet." my fave!!!!! #THEGIRL by @tommyhilfiger ⚓️ #ad

It is surprising, however, that Gigi’s sister Bella is absent on the list, despite being dubbed “Model of the Year” and modelling for the likes of Givenchy, Balmain and Fendi as well as being the face of Dior Beauty. Although, she is relatively new compared to her sister and Jenner – so we’re confident that she’ll make the list in the future!

But Brazilian Gisele Bundchen trumps everyone at the number 1 spot with her total earnings of $30.5 million – an impressive $20 million ahead of Adriana Lima – holding the title for the 15th consecutive year. The fashion titan is still killing the game despite the fact that she retired from the runway last year. How does she do it?!

Oh, that’s right. She only has major contracts with Chanel, Pantene, Carolina Herrera and her burgeoning lingerie and beauty empires. NABD.

Thank you so much for the birthday wishes!!! I am humbled and grateful for all the love. Sending you all a big kiss and may your lives be filed with Love and light always ✨❤✨ Muito obrigada por todos desejos de aniversário !!! Sinto-me honrada e grata por todo o amor. Um grande beijo a todos e que suas vidas sejam repletas de amor e luz sempre.

We’re all waiting to be reincarnated into Victoria Secret Models right about now.