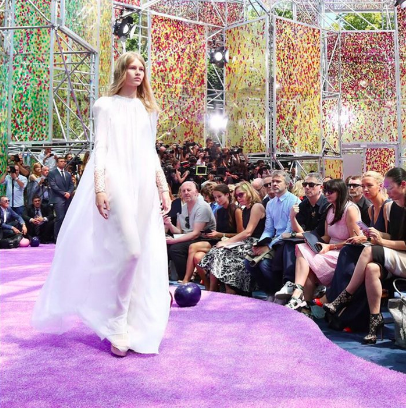 She has been dubbed the young “Claudia Schiffer”.

14-year-old Sofia Mechetner has been plucked from obscurity and catapulted into the world of high fashion, opening the recent Dior Haute Couture show in Paris.

It wasn’t long ago that Sophia, from Israel, shared a bedroom with two younger siblings, slept on a broken bed and helped with the chores while her single mum worked three jobs.

After being asked multiple times if she considered being a model, the 5-foot-11 blonde beauty joined Tel Aviv modelling agency Roberto. However, when she travelled to Paris with a chaperone to visit the French agency Viva, she was told she was too young to model.

While in Paris, Sophia and her chaperone visited a Dior store and spotted Dior’s creative director, Raf Simons. After her chaperone asked for a photograph, the designer was introduced to Sophia and instantly wanted her for his show.

According to the Washington Post, she has since signed a contract with the French house worth £170,000 ($AU359,513) and opened the Dior Haute Couture show on July 6.

Check out photos of the blue-eyed wonder who has many years of modelling ahead of her.