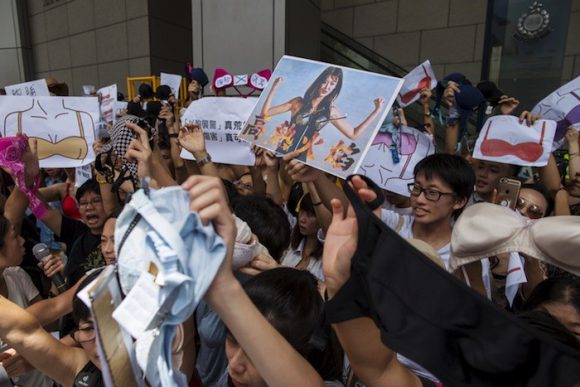 Activists in Hong Kong donned bras over their shirts to show support for a woman who was found guilty of ‘assaulting’ a police officer in the strangest way.

Up to 200 protesters took part in a “breast walk” outside police headquarters in the Wan Chai district on Sunday.

30-year-old woman Ng Lai-ying was sentenced to three-and-a-half months in prison on July 30 after bumping her chest on police officer, Chan Ka-po, in March.

Lai-ying alleged the police officer touched her left breast after he attempted to grab her bag and missed. She told the court she yelled “indecent assault” out of fear that he was trying to molest her. Her claims were ignored by the magistrate Michael Chan Pik-kiu.

Pik-kiu told the South China Morning Post that while Lai-ying’s assault did not cause the officer injury, Lai-ying’s “malicious” accusation of the police officer made her case serious.

Chan Pik-Kiu said that she “used her female identity to trump up the allegation that the officer had molested her”.

Activists waved bras and chanted “breasts are not weapons-give back our breast freedom” and “shame on police” during the protest. Even men were seen wearing bras without a shirt underneath.

Ng Lai-ying was originally protesting against cross-border traders in March 1 when she was charged with the assault.